Thoughts about the studio

Well it’s been almost a month since my last post here.  I’ve finally opened the studio up to the public.  If I had to guess, I think I’ve had the sign down on the sidewalk half a dozen times and have had two people come up over the course of the last week or two.  I think being up stairs is a big deterrent for people. 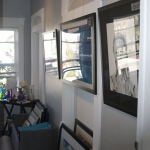 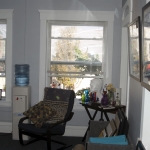 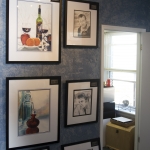 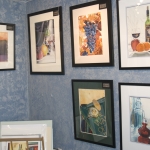 Ok, I’m trying to write this while I’m watching the Bears implode… Cutler is out after 9 sacks in the first half and Todd Collins got hit hard too, and is out.  Seems we are doomed to lose to the Giants.

Back to this art stuff.  I had a chance to attend the Itaska Art & Wine Festival, but I opted not to go.  There were some red flags I was concerned about:  the jury fee was waved, and the organizers were taking applicants up to the week of the show and I really didn’t feel like spending ~$500.00 just to get up there and show for three days.  A fine artist I met at the Lincoln show attended and I’m hoping to hear back from her about the show.

I worked on some smaller pieces for a fundraiser a few of my friends organize.  They turned out fair enough; I spent only about two hours on each, including matting them.   I hope they generate some money for the American Cancer Society.  This sort of set me back on resuming work on “The Collector” until today.

Oh I almost forgot, I decided on short notice last Wednesday to enter into the Illinois Watercolor Societies Members show.  That required me to take a painting up to Chicago for hand delivery to the American Academy of Art up on Michigan Ave.  So I grabbed ‘Reading Time’ and took the train up on Friday AM and got back later that evening.  It was nice to meet the President of the IWS, Tony Armendariz.