A friend of mine stopped by a few weeks back and asked if I was interested in participating in a little post card art exhibit designed  to raise grant money for art students in need at the university here.  Somewhat enthused I said yes.  We chatted a bit in the studio and as the conversation went on, I became more interested in attending the entire affair.

I had about a week to donate a small post card sized painting so I started rummaging through a lot of my old photos.  One sprang to mind; it was a shot I snatched with my phone that was one of those right time right place photos.  This image has been lurking in the back of my mind since, begging to be brought back to life in watercolor.

Normally I like to work larger, but I had already scaled down to a few 7” x 12” sized paintings and I figured a 4” x 6” would not be too different.  To my surprise, painting this was fun!  There are some interesting techniques to painting small and there is a mastery to be achieved even at this scale.  I’d even argue that smaller art demands more attentiveness and precision.  I got the post card done and turned it in on the last day.  Fast forward to the artist reception. 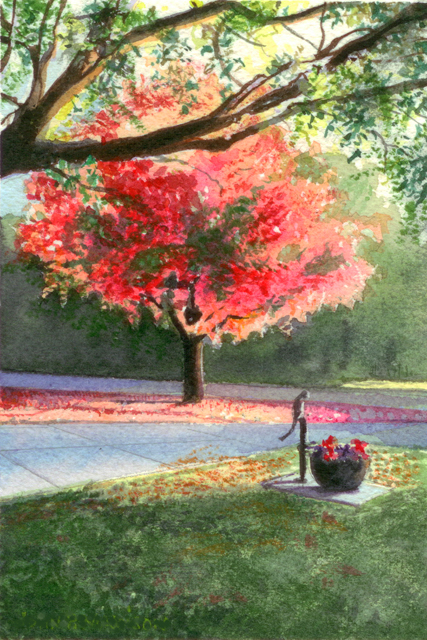 I was a bit nervous, and didn’t know what to expect.  There were some familiar faces in attendance and it didn’t take too long to get into a mingling mood.  There were 100’s of post cards hanging and I recognized a few and liked about a dozen more.  Two hours later I had strolled the exhibit several times, had a few glasses of wine and even got to vote on my favorites.

Fast forward again to the event opening.  Dressed in business casual, I strolled in last Saturday with a bit more confidence and felt an equal as far as the artist factor goes.  Sixteen of the highest voted pieces were picked out to be auctioned off to the highest bidder.  An entry ticket ran $60.00 but it guaranteed you would walk out with an original piece of art.  In addition there was an open bar and a great selection of Hors d’oeuvres.  I had about ten votes on my little painting, which was well above average but not enough to get on the spotlight auction.

About 100 people attended, there was instrumental live music, plenty of wine and food and things got going once the bidding started on any painting that had more than one claim sticker on it.  The bidding was intoxicating and it was very tempting to just run with it in the excitement.  I had my eye on three pieces, so I put my bid number stickers on all three.   Two of the three had other bid stickers on them, which meant I had to out-bid my competitors.  If you were the lone sticker on a piece it was yours for your ticket price or 50.00 if you had subsequent stickers on additional art.

I had stickers on a figurative watercolor depicting a horses head, a photo of a classic car zoomed in tight on the reflections around the passenger mirror and windows and lastly a vivid landscape crafted by a local artist name Jeff Little.  I lost the bidding war on the horse, was unopposed on the car photo and had more competition on the landscape which was last to be bid on as far as my stickers were concerned.  Jeff Little’s painting finally came up.  He’s a great artist  http://www.angelfire.com/art/wiredjeff/ that has been in the craft for a long time.  I am drawn to his work because it is detailed and tight but also displays great color expression and depth.  All his landscapes are well composed, meticulous and very vibrant.

Bidding opened at 60.00 and it jumped very quickly to 100.00.  I opted in around that time and held on till it hit 150.00 before I had to contemplate what the consequences may be for buying art when we didn’t budget for it.  The four glasses of Malbec said to keep bidding, but the “You’re going to get your ass kicked when you get home” told me to put my bid card down and not challenge the 200.00.  Wiser in my old age I had to watch my favorite painting go to another buyer.

The best thing about this was the fact that I met Jeff and got to chat for a spell during the event.  I also met several other people and got to talk to some (yes you Karen!) that I had only been introduced to before.  The Post Card Art show was great, and I’m glad I attended as well as submitted work.  I’ll be back next year for sure, hoping to exceed the $160.00 my picture brought in this year.