I got about four hours of painting in tonight, most of it was accompanied by thunderstorms.  It has been raining incessantly the last few weeks.  I imagine most of the farmers are sitting idly watching their crops wash away.

Well, several days have passed since I started these new paintings, I meant to get back to my narrative but I have been busy this last week with the family.  I did manage to get two good nights of painting in, which amounts to about ten hours.  It is still not enough to satisfy my output goals, but it is better than nothing I suppose.

‘Liquid Gladiators’ is a follow-up painting to ‘Studio Snack’, which I did about a year ago.  The image is part of the same photo shoot I did when I was working on the first still life.   I’m going to move away from wine bottles after this, though I still have a few ideas for another painting or two.  I’ve also been re-reading some of my earlier posts on this blog and I have somewhat strayed from previous ideas I had just a few weeks ago… e.g., working smaller and moving towards more personal things to paint.  I’ve been told my work doesn’t convey anything about me, and this comes from accomplished artists whom I respect a great deal.  This goes back to my earlier notions of being a sell out, but I’m not going to beat that horse again.  Well see where this goes eventually, for better or worse I’m still going to keep painting, and hopefully something internal will click and people will begin to see more than just a good mechanical rendering of something.

Back to the paper and pigment.  So I outlined the imagery onto a piece of 16” x 20” cold press, taped it off and sat thinking how I would start.  Usually I tend to wander around a painting as certain worked areas dry, I’ll move off to another corner and start in.  The rule of thumb for me is to paint light to dark, preserving the white paper as needed.  So that is how I look at anything I paint, I see the light first and work around it with value and color.   Another method I have seen used is to section off shapes in a painting and paint them to completion then move onto another area. It is sort of like painting white puzzle pieces already assembled and finishing each before you move on to the next.  This helps break the complexities down into shape and form and helps focus on getting details right.  So this is what I thought I would try with these two new paintings.  Instead of wandering around waiting for sections to dry, I work a specific area up and moved to the other painting, rotating back and forth until I have finished puzzle pieces.

The first pigment to touch the paper on ‘Liquid Gladiators’ was a wet on wet wash on the left side of the entire painting.  I used scotch tape and lined down the bottles edge then masked the top curving section off.  I took an extra minute to kneed down the tape real good and laid a few clean paint rags over the rest of the painting just in case my diluted brush dripped anything as I was coming across.   I started with some Naples Yellow at the bottom and added in some Alizarin Crimson and Cadmium Orange just above it.  I had to wait a little bit for the paper to dry some so the bleeding would not overtake the Naples.  I worked towards the top, with a little more diluted Cadmium Orange and dropped in some Ultramarine Blue and then flooded the top with Payne’s Grey.  I waited for the first layer to dry, and repeated this two to three more times until I got the values where I wanted them.  I also dropped in a clear water wash to unify all of it with a 2” flat brush, and that pretty much finished the section off.  I removed the tape and masking and took a long look at that edge.  I did notice a few imperfections so I used my handy x-acto knife to tidy up the edge by scraping the paint off.  I call it my watercolor eraser.  It too has some drawbacks, in that it tears up the surface of the paper, but it really is a useful tool I find myself relying on more often lately.

Next I worked on the lower bottle and started under painting the colors I wanted to show through what would ultimately be the Indigo and Payne’s Grey surface.  I laid down some Winsor Blue-Green Shade, a touch of Ultramarine and Alizaron Crimson to cover the lighter parts of the bottle.  The orange reflections that would be preserved were a base coat of Naples Yellow and a few layers of Winsor Red, Cadmium Orange and more Alizaron Crimson.  Some of this was done wet in wet to soften the edge up.   Overall this section has about ten layers of paint on it.  In the past I’ve gone too dark to fast and ruined a few paintings.  I prefer to drop the value down in stages so as not to go too far.  In watercolor, you can’t paint over things like you can in other mediums, so what you put down for the most part you have to live with.  Pulling up Indigo or Payne’s Grey is nearly impossible.

Lastly I moved to the right of the stem of the wine glass and worked wet in wet.  The first wash was Raw Umber I think, or maybe it was Yellow Ochre.  While the paper still had that damp feel to it, I put down some Neutral Tint and worked that transition over several layers to keep the gradient smooth.  I used to be impatient on my washes, which is something one learns over time.  If you just wait until the layers are totally dry, you have a lot more liberty in glazing over the top.  The pigment will work in your favor and not against you.  A sure sign you’re not waiting long enough is when you start in on a wash and it starts pulling off under layer pigment.  You will see these wonderful water blooms that spread out like shock waves across the paper, carrying away the pigment like a glacier ripping off topsoil, causing all kinds of color distortions, to my annoyance.  Better yet is when the paper starts to look like mud; which drives me to keep adding more and more pigment to fix it.  The best thing I’ve found is to just let it dry and work over it.  I have had some success in using a wet sponge and just washing the area out and pulling up everything, but again if you’re in a tight area that has good paint on it, you will find it challenging to use a soaking wet sponge like a surgical instrument.  Hell, you may have a better shot if you can tape off the area you want to pull paint up from, much the same way I have done to create those fine lines.

Alright, I’ll get off my painting soap box, my coffee is cold, and my laptop is about out of juice, so I’ll head back upstairs, take a few more progress photos and hopefully get another ten hours in today.  I’ll resume with the book painting and try to provide more photos of both tonight or tomorrow. 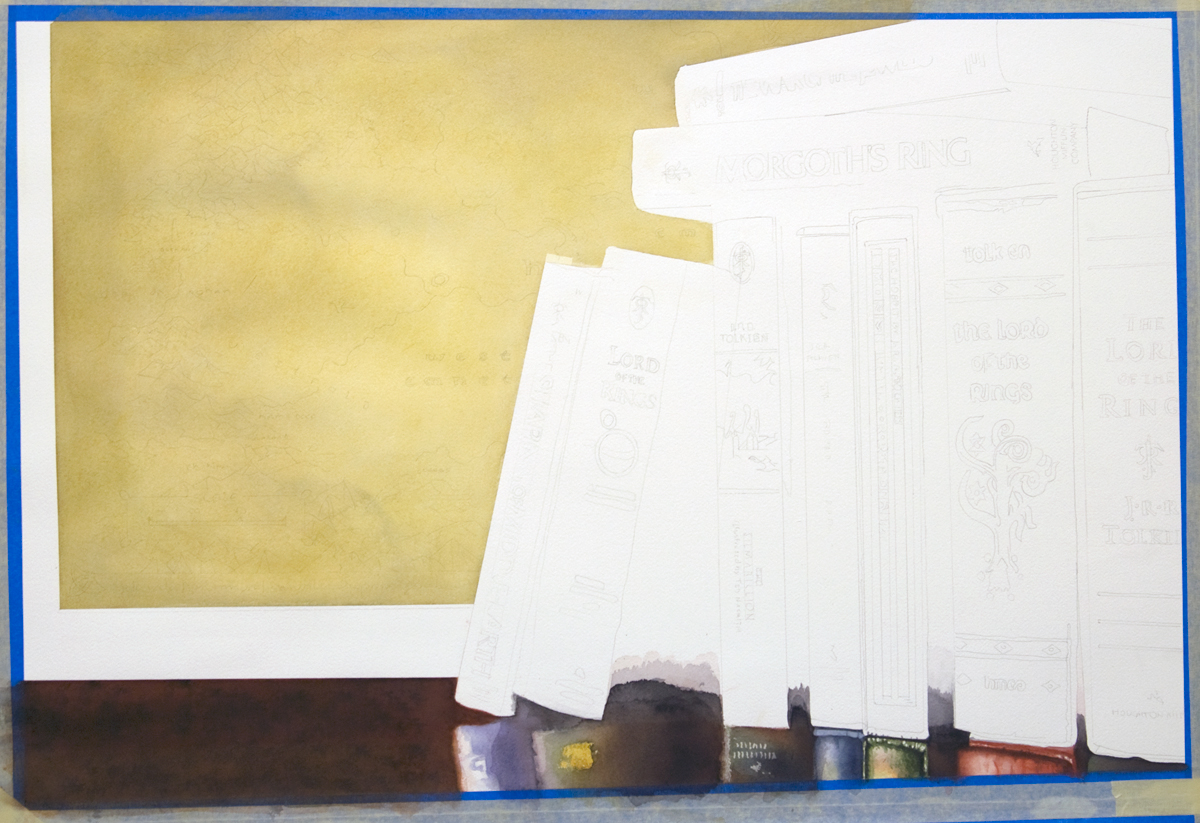