I managed to get a few hours in the studio over the weekend, but I didn’t get a lot done. The place is a pigsty from the last art festival. When I tore down I pretty much just hauled everything upstairs and left it where I dropped it. I didn’t have the energy to clean the place thoroughly and I’ve slowly been picking up things here and there over the last two weeks. I need to get my son down to help me load the tent gear up into the van and take it home so I can re-set it up and take my time to learn how to put in the door exit, my banner sign and the awnings. Then I need to mark the setup so I can be better prepared for the Washington festival coming up. I also need to store that monster thing at home instead of the studio floor

My weekend was so busy with my kids swimming. The annual intercity parks and recreation conference swim meet was Saturday and Sunday and we were there most of each day watching them compete. I had some proud moments as a parent and I will relish these times with my kids. My daughter set a conference and team record in the butterfly, so her name will go up on the record boards until someone else comes along and eclipses her time. She already has younger girls knocking off her old records from last year. Both my sons did well also, making it to finals on Sunday in a few events. I even brought my sketchbook but didn’t drag it out to draw, mostly because I was up every ten minutes or so watching someone swim. Speaking of which, I have a little more progress on this big painting.

This image shows some development on the background map, and work on the Hobbit book in green. This involved a lot of taping and patience. There is gilding on the real book that wraps the red pin stripes so I had to spend a lot of time on that area and I still don’t have it done. The new watercolor paint I bought from Daniel Smith was used on the gilded elements of the green Hobbit book. I’m tempted to try it on the lettering but the paint is very opaque and getting a nice blend out of it doesn’t seem possible, so I think I’m going to avoid using this antique gold on the rest of the painting. 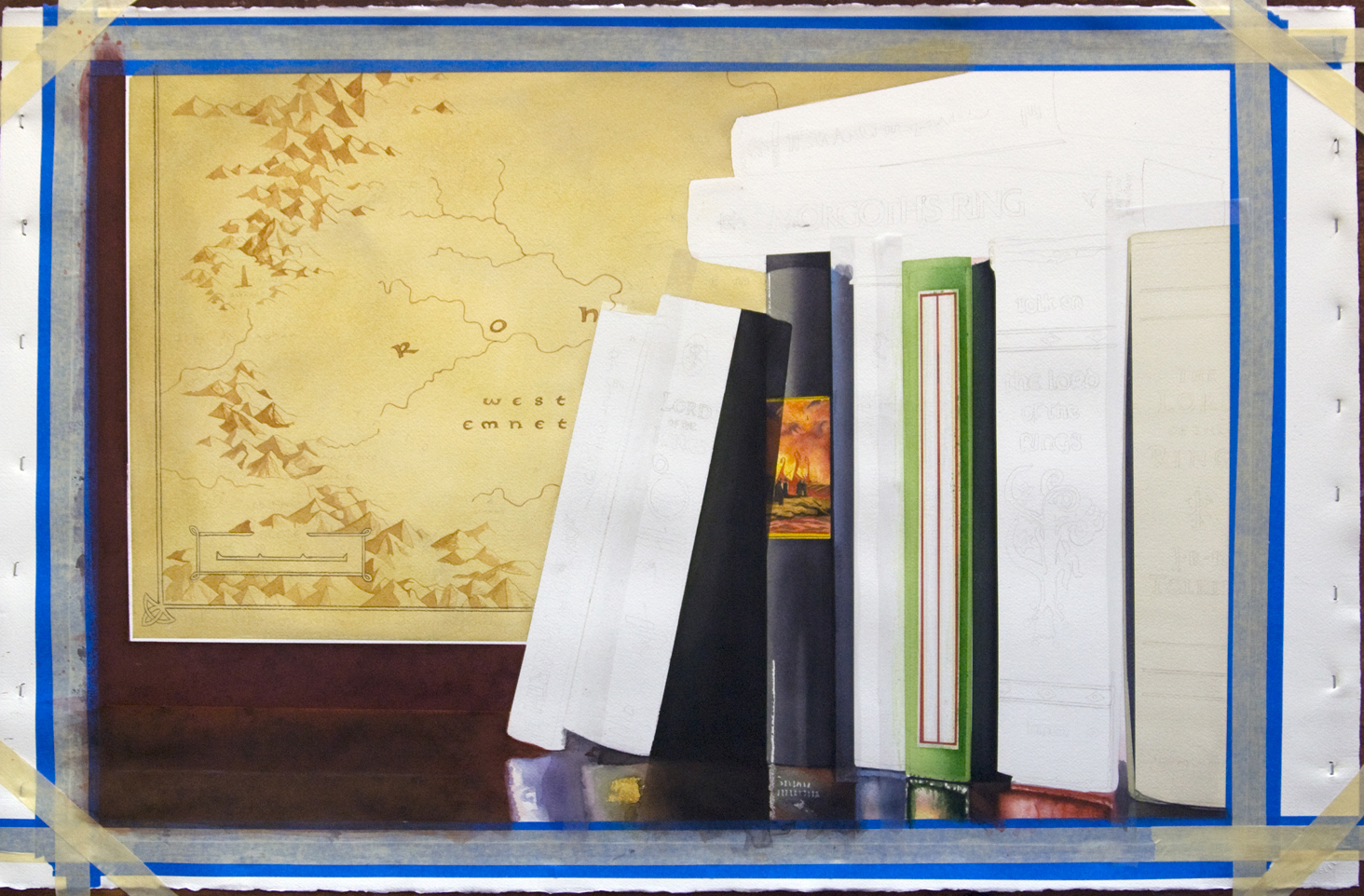 Several hours after I took this photo, I managed to make my first mistake. I blocked in the top book in Emerald Green and it didn’t lay down as smooth as I wanted. In addition, my taping didn’t hold up well either and I got some major bleeding into the yellow of the map. I was pretty pissed off about it then, but I think I can recover and no one will notice in the end. I pulled a lot of it up with a damp Magic Eraser, yes the cleaning kind you find at the store. It lightened the pigment turning most of the paper back to its original white, but there are still traces of green I can’t seem to remove. I do need to darken the map a lot more, so I hope I can make the green ‘stains’ disappear altogether. Time will tell.Well that is enough for now, I’m planning on draining a few beers after work and returning back to the studio to paint some more. Later…