Making art and selling art are two different animals requiring a vastly different array of skills and time commitments.  I’ve learned this the hard way since attending my first festival back in the spring.  Generally I have felt ill prepared for all of them, frantic on getting my tent setup, and the hundred other steps it takes to be ready for the first ‘customer’ to roam into the tent.  Things have improved each time, yet I know I have not reached the level of efficiency and presentation I want to be at.  2011 will be the real test for me.  I hope to get into around a dozen shows, which will require careful planning with my day job, my family and vacation plans for the year.

I work full time as a network engineer and do all this art stuff after hours.  It cuts deep into my time at home, my family and our budget.  Most of the time I feel that I that I’ve shot my wad on all these startup expenses: Flourish Tent, Happy Feet Tent Weights, Frames, Mats, a Mat Cutter, Bags, Prints etc.  It probably has cost me somewhere around $5,000.00 give or take a few and I have barely dented into that with sales.  Sitting in a tent with all your ‘gear’ hanging out for everyone to peruse for two days can get discouraging, especially when the vast majority pass through without a even a notion to look at all the art and prints available to them.  Doubt sinks in, slowly at first, but it gets reaffirmed with every passing customer and often I find myself asking: “Why are you even here?”.  “You should not have spent all that money on this, you should have just stayed home”.   These thoughts lurk in the back of my mind more often than I would like, and as I continue spending money, I worry more and more about getting something in return for my time and effort, and the sacrifices my family  has had to endure in order for me to have this hobby.  So I’m out there in the heat, at my second outdoor festival and its about as slow as molasses in winter.  Saturday was dead and I sold one small print which paid for my lunch.  Sunday seemed better, the heat ebbed and there was a nice breeze rolling in, which brought a lot more people out, but still sales were sparse and I was ready to return home still in the red.  I had just three hours left until I could pack up and go home.

Then the most unlikely thing happened at the Washington Art Festival.  While I was out strolling the art show taking a break watching people pass by, my youngest son watched my tent.  Robert is a better salesman than me apparently.  When I came back from my 10-15 minute walk, he said: “Dad there was some people that came in and they really liked your artwork, I think they were close to buying something”.  I said, “Really?” and then dismissed it, since all I had moved up until that point was about four or five 5” x 7” matted prints. 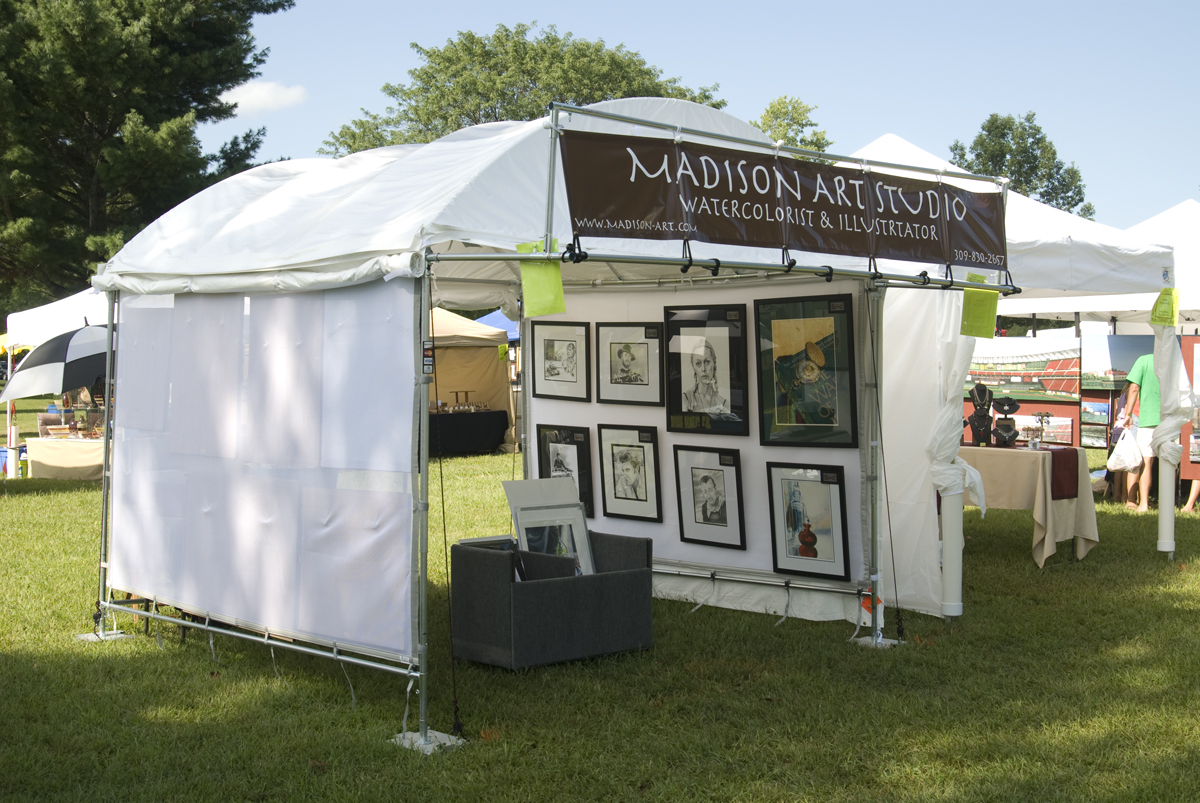 About an hour passed and this time Robert was roaming around and I was tending my wares when a couple strolled in.  I said hi and smiled and tried to give them space to look around without pressure (which is my policy).  After about fifteen seconds they turned and said to me, “We want to buy a painting.” I asked them if they had something in mind, and they pointed to the Original of ‘Liquid Gladiators’, a watercolor I just finished no less than a month prior.  BOOM!  I went from zero to hero in one sale.  It made the show for me and really felt good that a couple that purchased my first non-commission original didn’t know me from Adam.  Then I remembered why I decided to do all this, and all the doubt and pessimism washed away in an instant.  Robert was electric when he walked back in as I was ringing them up.   He is my best fan and it gives me the deepest sense of humility and gratitude when I hear him praise me and pat me on the back saying, “I told you so Dad!”  He smiled like the Cheshire cat for at least ten to fifteen minutes and wanted to call mom right away to tell her.  I managed to keep the lid on it until Jenny showed up to help tear down a few hours later.  I guess that is how art festivals work, moments of feast and famine.

No risk, no reward, right?   I have to remember that, and also keep telling myself I’m on the ten-year career plan.  Ten years left until I can retire from ISU and have the security of health insurance until I’m dead.  In that time, in order to walk away from the 9-5 I have to build this art business up to a level that I can support myself comfortably as long as I wish to keep painting and doing festivals.  I think I’ll know by next year whether this is a fantasy or realistically attainable.  Perhaps something else will happen along the way that will open more doors for me to accelerate my plan.  There are tons of contests I’d like to enter.  Maybe I’ll place in something, and get some coverage in one of the art magazines I subscribe to.  Time will tell.  I think art works like a pebble rolling down a mountain.  If it gets some momentum it can turn into an avalanche. 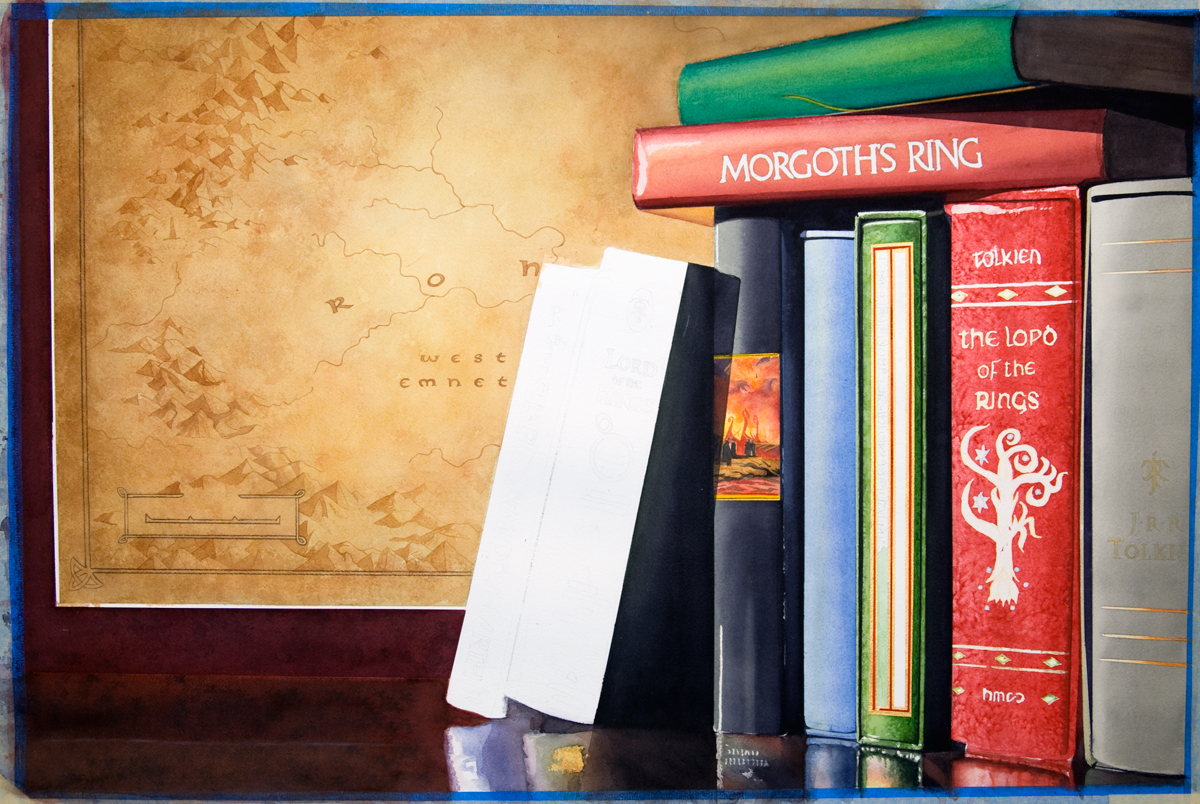 Right now, I’m in the middle of repainting the studio and getting some track lighting hung so I can finally open my doors to the public.  It really is a nice place and even with all the buildings lack of updates, it does have character and the location is the best in the county as far as art studios go.  I just need to get open… like yesterday.   Aside from the studio, I have my last art festival coming up: http://www.lincolnillinois.com/ABF.aspx I had hoped to get ‘The Collector” finished up but I’m having doubts.  I need to mat another 30-40 prints still, and put in another twenty hours on the painting.  It really is turning out well I just seem to be avoiding it for some reason.  I don’t think I will get prints of it ready in time even if I were to finish it by Wednesday.  So maybe I’ll just get it scanned and worry about prints later and just focus myself on painting.

My wife is heading out Tuesday evening for her 40th birthday.  I tried to surprise her with a  trip to the island of Anguilla, but it proved futile.  She found out like she always does and I realize I would have had to have laundered money; like drug dealer, into a friends account in order to pay for it without her knowing.  Then there was the passport thing, which sorta blew it as well.  So she is out in a few days, and my kids start their first week of school tomorrow.  My plate is full this week and there will be no reprieve until next Monday.  Until then, I have lots to do, and little time to do it.