So it has come to the last bit of this painting, and I’m not enjoying the work at this point.  It’s all about precision with letters, and I’ve steered myself into a corner I really would have preferred to avoid.  I believe even now as I write this, that the method I have decided on was the only logical way for me to work in small-scale hand painted letters.  Gouache… yes, I said it.  Technically could I call it watercolor? Yes perhaps, but in the true spirit of the medium I think I’ve committed my first cheat in taking the easy way out.

Having just called myself a cheat for using Gouache over watercolor, I don’t think I could have finished this painting let alone be satisfied with it.  The alternative would have me attempting to preserve the white of the paper by masking the letters out so that I could paint the books as I have.  I pride myself on using transparent watercolor and that alone when I paint.  Perhaps I’m being obtuse as an artist, inflexible, or unwilling to delve into other mediums.  Painting with acrylic or opaque pigments, allows you to work in overlapping layers, covering  mistakes and using white where it’s needed.  Watercolor is a different animal and the white is what you don’t paint, layers are transparent and covering mistakes isn’t possible, all you can do is lift and mask and bring out the Xacto in tough situations. So in a sense there is no going back without consequence.  That makes watercolor more difficult to work with, let alone tame and bend to your will.

Speaking of gouache over watercolor, lets dive into a section of The Collector.  The War of the Jewels book has been a thorn in my side all the way back when I first put down the initial layers of green.  My taping leaked green pigment under it and spilled into the Naples yellow map.  So I resorted to lifting and scraping and really tore up the paper surface, which will forever distort future washes and layers in those areas.  I managed to hide those small disasters well enough and kept going.   Thirty hours later I decided that the horizontal reflection of light on the binding of this book was not bright enough, so I used a Magic Eraser to lift more and did a decent job not damaging the  paper enough to distort future washes.  I was threatening to turn the area into a greenish-yellow mud, so I gave up and moved onto other sections.  Thirty more hours have thus passed and all the books were done less the lettering.  So I had to return to my nemesis, The War of the Jewels book.

I sat staring at it, and finally busted out a few tubes of Winsor gouache and started in left to right.  Assessing my previous attempt to brighten the sun reflection on the green binding, I found myself wanting.  The book looked good, but I knew it would look better if it was whiter, the problem is the letters are white and the reflection runs right along the top ¼ of most of them, whiting them out.  Decisions… decisions.  I decided with as much time as I’ve committed that I’m just going to put the lettering down and be done with it.  So there I went using white gouache and started painting that thick nasty fast drying crap onto my paper.  It seemed to take forever, like trying to paint with toothpaste.  Water it down too much and it looks like milk, to thick it looks like an oil painters canvas.

@$*%^ it!  I thought to myself, and kept going.  I was pot committed already.  After I finished the letters, I stopped and took the board off the desk and set it up vertical to look at it at some distance.  Too white! God…  This was really giving me a fight but at this juncture my stubbornness and vested time was too great to even consider starting over or walking away.  And yes I have done that before.  Fire & Ice was the 3rd attempt, as was Elizabeth.  Their predecessors were cut into pieces for color testing on the backsides.  I have yet to rip up a painting and not attempt a successor though.  I’m sure it’s bound to happen at some point.

I put the board back down and added in more gouache over the letters to blur them out in the sunlight.  It sort of worked, but after gouache dries it doesn’t look as pleasant to me so I have to fix it again.  I could mask the Jewels book off entirely using tape and hit it with a Magic eraser until I have nothing left in its place but tinged white paper… then I could start from scratch and fix that light reflection as well.  However, I don’t trust the tape or myself enough in isolating the book sufficiently to prevent lifting what is adjacent.  Or, maybe I will get lucky? 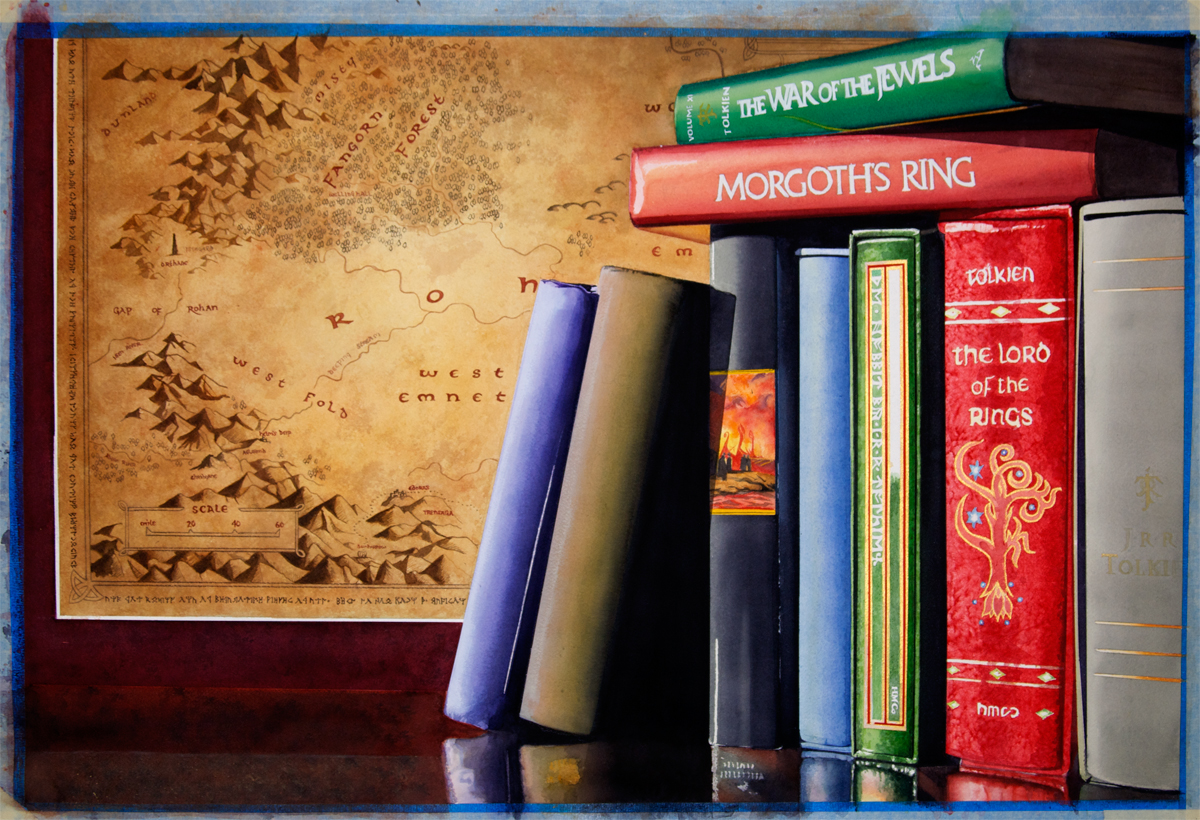