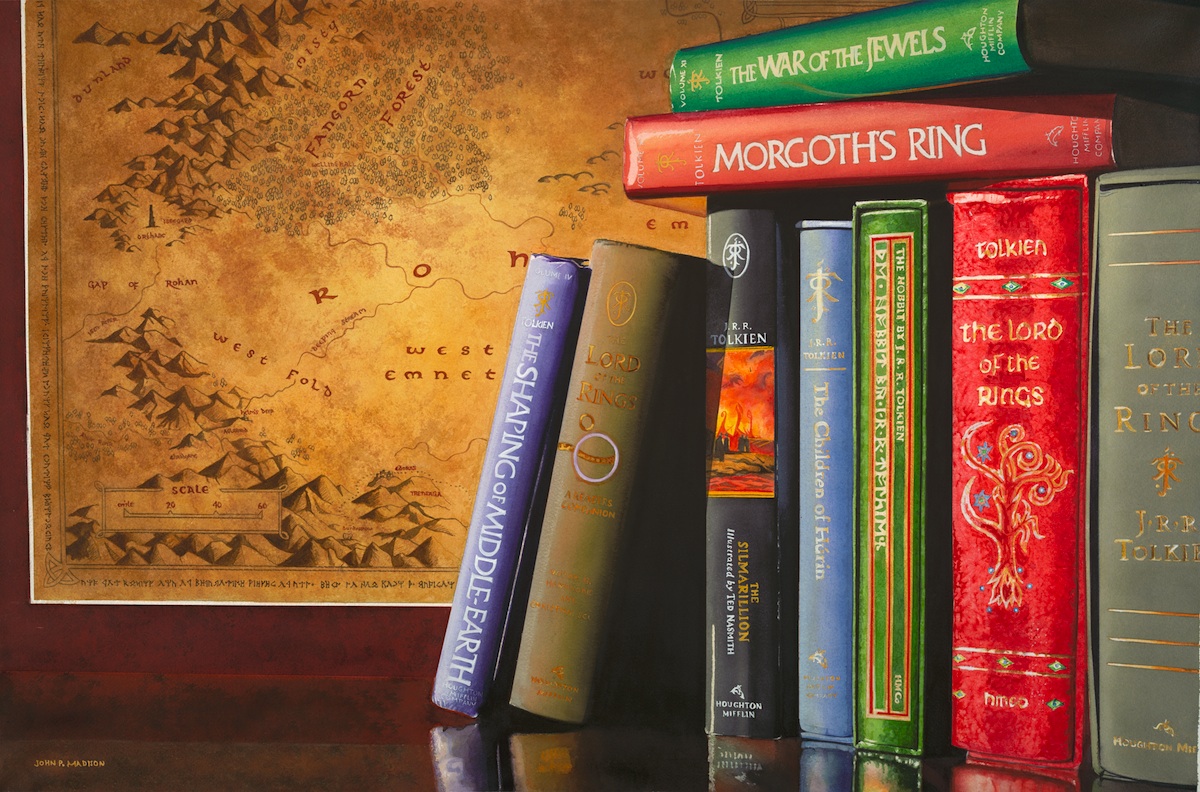 My Lord of the Rings Book Collection

When I took the photo of my Lord of the Rings Book collection back in October of 2007, I thought how great it would be to be able to paint it.  I knew then that I didn’t possess the skill to pull a painting like this off.  It was the letters that seemed impossible to ‘not’ paint.   Jumping forward three years, having finished this endeavor, I learned that my initial instincts were right.  I spent as much time on the letters or trying to work around them as I did painting everything else in the painting.

My best guess on time invested into ‘The Collector’ is approximately 100 hours.  Worth it? Yes now that I’m done.  During the process as the weeks turned into months I was sick of the painting and wanted it to be over.   I began the painting on June 20th working at the same time I started ‘Liquid Gladiators’.  June 20th!  It is almost December 20th… six months & 100 hours for one piece.  If I was a general that would be a pyrrhic victory wouldn’t it?  Hard to make this a living when it will generate me $1200.00 assuming I sell it.  Well, the hell with the math and time, it’s about the process and this one taught me some things.

First and foremost, letters are a process in and of themselves.  If anything requires ultimate precision it is lettering.  We are so used to typed print: Word, Photoshop, Illustrator, and the perfect text we see in almost everything we read.  I tried to hold myself to that standard with my hand and a paintbrush.  Close was the best effort I could muster.  After staring at the picture with a 0 & 00 round brush trying to paint a font that was maybe 8pt in size things just got blurry and I had to take breaks and take off my glasses due to the strain.  It’s hard to believe that the delimiter of my painting is going to by my eyes and not my willpower.

As much as I pride myself on being a transparent watercolor painter, I had to resort to opaque paint (gouache) to get the job done.  I relied upon this with about half of the books, and used masking for the other half.  White was also used to add in some highlights and it helped to compliment the metallic watercolors I tried out.  Overall I’m happy with my work and based upon early feedback from my friends and people on Facebook, this seems to be a very successful edition to my portfolio.

If I was a digital painter, I think this painting would have further benefited from what you can do with lighting effects.  It is very difficult to simulate sunlight on metallic lettering at such a small scale and make it believable.  The painting is a small step closer to who I am as an artist.  The subject itself speaks some truths about me though the image isn’t very narrative of anything particular unless of course you know me well enough, then I think the revelation manifests.

Hopefully this small step will be a turning point for me in moving my artwork into a more personal, thought provoking direction.  I’ve always had a strong interest in fantasy illustration and really letting my imagination come to life on the 2D.  The Collector skims the surface of a deep ocean of ideas I have.  There will be fantasy paintings in 2011, and I think there will be an audience for them just as I’m sure this painting has already.  Maybe then something deeper will be revealed in my work.  It is December 5th and the Spectrum 17 just hit the shelves and it is a swirling mass of painting ideas wrapped up in one book.  I get the itch to move over to fantasy every time I pick one up.  It is one of my favorite things about December each year.